The class of 2021 has a lot to live up to after the amazing performances from this year's juniors. 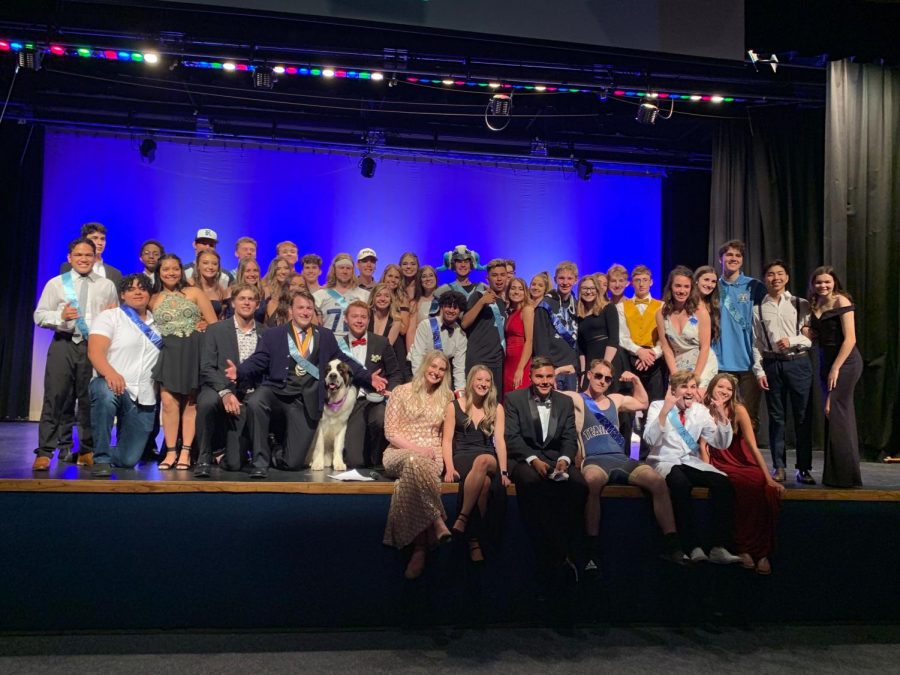 All misters, escorts and hosts after the pageant

Once again, another successful Mr. Rogers pageant took place on May 30th. Joel Antush, Mr. DECA, won all with his hilarious remake of the Chippendales audition from 1990’s Saturday Night Live.  It was an entertaining evening, watching 21 junior class misters present their comedic “talents” in the PAC.

When host Joey Ancheta announced the victor, Joel was shocked. Even saying the words, “I’m speechless.”

Additionally, Nico Ebora, who gave the night a “10 out of 10”, became the runner up. Although he was “Mr. English”, he put up a good fight in his boxing skit against Mr. Track Scott Brewer, including gloves, shorts, mentors and all, leaving the crowd cheering wildly. Even a scorecard “girl,” Zach Rossemeier, was featured, giving the audience a surprised laugh.

Coincidentally, Zach Rossmeier, “Mr. Football”, took the first ever title of Mr. Congeniality, meaning he had the best personality and really put on a show. That being said, he did perform or was featured in three talents including his own. Undoubtedly he seemed very passionate in all of his acts. Zach says,

“It’s a real honor, because I’ve worked really hard for this…I’m proud of the act and grateful for everyone and amen.”

Morgan Miles, a junior and escort to Mr. Golf Dario Segura, says that,

“Out of the four I’ve seen, I thought it was the best Mr. Rogers ever.”

Representing a majority of sports, clubs, classes, musical talents, and other extracurriculars, Mr. Rogers essentially pokes fun at the Daffodil Princess Pageant from the beginning of the school year; Conveying all parts to a normal pageant, yet with a comical twist.

Those parts including introductions with escorts, a group performance to start the night off (in this case a boy band dance choreographed by Megan Gratzer), a “talent” portion (usually a mixture between real skills and humorous fun), and a series of questions to wrap the event up, which also aren’t answered seriously consistently.

Finally, the new Mr. Rogers is announced, and is beseeched the privilege to wear the honorary sweater that has been passed down for years. Referring to the actual 1960s TV series, Mister Roger’s Neighborhood, printed on the back of the sweater is “It’s a beautiful day in the neighborhood.” Every pageant starts with the previous years’ winner mocking the TV show while wearing the sweater. Then at the finale, he must give the new Mr. Rogers that same sweater to carry on the tradition.