Three cars were damaged in a fire in the Heritage parking lot. 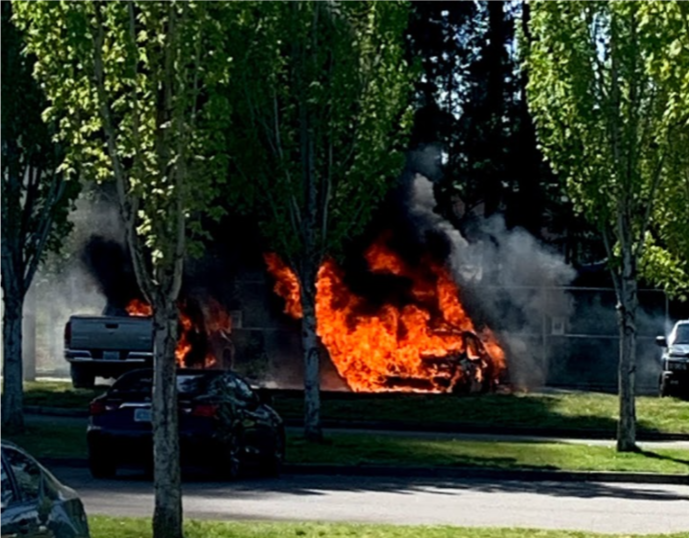 On May 10th, Friday afternoon around three o’clock a car burst into flames at Heritage Park. Shattering glass and the sound of popping tires could be heard for quite sometime while a car was ablaze. Bystanders could see glass and debris being thrown from the vehicle as it burned. Thankfully, the owner of the car, Juliette Amiotte was able to get away before it was engulfed  in flames.

According to the Fire Department’s investigation report, they know the fire initially started in the white 2019 Toyota Camry XLE, they are unable to pinpoint the initial source of the fire. The Amiotte confirmed that nothing was plugged in and that she nor anyone else smoked or vaped in the vehicle.

The Amiotte reported that before she entered the vehicle there was smoke in the car, not visible to her until she opened the drivers door. Upon peering in the back seat she saw it was on fire and immediately called 911. She said she has had no problems with the car before and everything was in working order. Due to the fire, $58,000 worth of irreparable damage was done to the car.

Inside the car was also a DVD player. The DVD player had a lithium battery, and although there are no active recalls on the device, lithium batteries when overheated can rupture and even explode. Could this be a possible explanation for this devastating loss?

Along with the damage to the car that initially caught flame, the vehicles parked adjacent to it, a green Dodge Ram 2500 owned by Justin Luckman and a blue/gray Chevrolet Colorado owned by Andrew Herrick, also caught fire. The intense heat of the fire caused the truck to eventually catch flame as well. Although the damage to the truck was not as extensive as the car, it was still devastating. The interior, right side of the truck, and the tires of the vehicle were destroyed. The bed of the truck and the cover over it  were also burned in the flames.

The Chevy Colorado, parked on the left side of the Camary about 9-12 feet away, also was damaged although not as extensive as the other two vehicles. The damage to the Colorado was very minor and only affected the exterior of the car on the right side. The fender, side mirror, and the door handles on that side of the vehicle were melted and disfigured due to the intense heat.

Plumes of black and gray smoke were like a beacon to the incident. Fire trucks came from both directions to combat the intense flame. As soon as the first truck arrived, the firefighters immediately got to work extinguishing the blaze. At one point the firefighters had to cut into the front end of the Camry in order to extinguish the flames nestled below the metal frame or the car.

When the flames were finally extinguished and the danger had passed only one of the vehicle owner’s was able to drive home in the vehicle they arrived in. Andrew Herrick, the owner of the Chevrolet Colorado, was able to drive away in his vehicle after such frightening and nerve-wracking day. Sadly the other two vehicle owner’s were not as fortunate, and their vehicles had to be towed out of the parking lot.

The terrible blaze left not only the vehicles damaged, but the parking lot was also damaged in the incident. The grass in front of where the vehicles were parked was left dead and black, scorched to nothing in the flames. The once well maintained vegetation in the area was destroyed and darkened. The four or five parking stalls where the incident occurred were also left scorched and littered with debris from the vehicles.