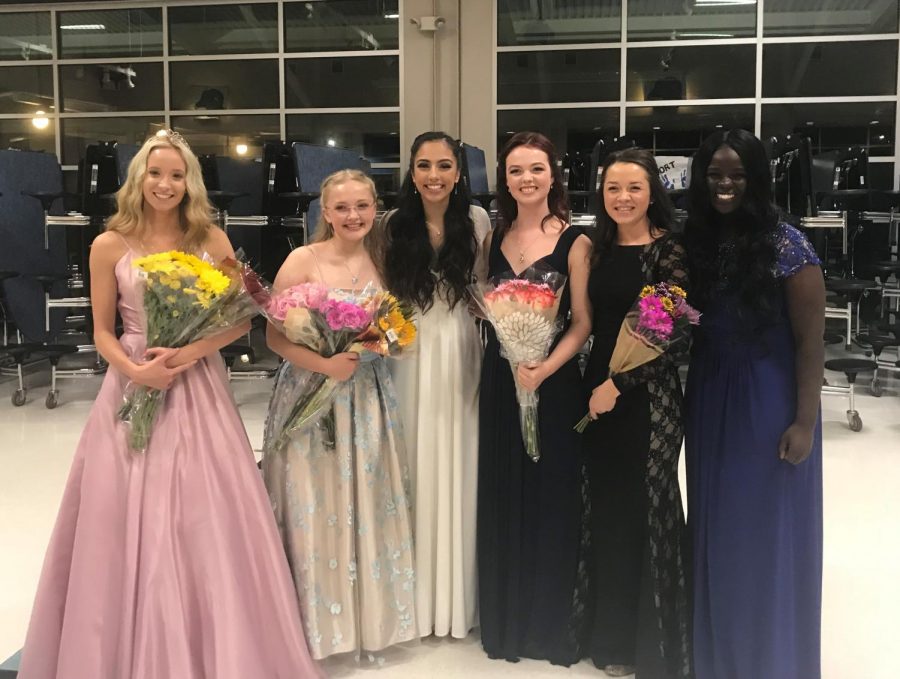 Haley Beyer was crowned this year’s Daffodil Festival princess from Rogers High School on Monday, Oct. 22, in the PAC. After an hour of introductions, speeches, and impromptu questions, Beyer was coronated.

“Having a heart for service does not mean going above and beyond all the time. It means waking up every day and doing something small to make everyone feel loved and appreciated,” was one significant message from her speech.

Beyer’s speech highlighted the personal ideal that she claims to live by, that taking small moments throughout the day to promote kindness and positivity can change people’s moods and outlooks. She said that the opportunity to be Daffodil princess would allow her to spread that positivity to others around the community.

The five other candidates were Miriam Kayango, Aidan Moeck, Brennah Llanos, Emilie Svensson, and Sabrina Engberg. They were escorted by JROTC members Jacob Tucker, Jeremiah Filoteo, Philo Shin, Logan Madsen, and Ian Sampson. Beyer was escorted by David Caven. Each candidate was required to complete a private interview with the judges, recite a speech about community service, and answer impromptu questions from teachers.

Highlights from the competition came in part from the speech portion. The theme of the event was “A Heart for Service,” and the candidates were tasked with writing a speech addressing the theme. Kayango talked about her role in the Pacific Northwest Ugandan American Association, and how it has helped her to become closer to her culture and community.

“Having a heart for service means gladly giving up your time to help improve the lives of others without the expectation of recognition for the hours or even days put in,” she said.

The fourth candidate on the agenda, Svensson, said in her speech, “In April 2015, I was diagnosed with Type 1 diabetes. While my diagnosis was a difficult time for me, I had two wonderful nurses who helped me through it. They told me jokes and really focused on caring for me as a whole person. Because of them, I have a greater passion to care for my community.” The compassion shown to her inspired her to give back to others, which she elaborated on within her speech.

In the impromptu question portion, the candidates had to come up with answers to a variety of questions on the spot. Beyer was asked which member of the RHS staff deserves more recognition than they have received, and she answered with teacher Ken Zentz, “because of the energy he brings. He’s just a kind, heartwarming presence.”

Llanos described which qualities she believes people need to have in order to serve others well. Keeping her answer brief but precise, Llanos explained that you need to go about community service with a happy heart, and need to do it for others before you are doing it for yourself.

Moeck’s question was asking which community service group or program she would start within the community, and what its mission would be. Moeck described the impact that children have had on her life, saying that the group she would start would encourage children to create self-confidence, in order to help them grow up with positive self-esteem.

The last question was given to Engberg. When asked which cause or organization she would support if she had all the money in the world, Engberg replied, “I would support UNICEF because it is an organization I have worked with for many years in Key Club, and they work with countries that do not have the necessary resources to take care of their people.”

Last year’s Daffodil Festival princess from Rogers, Lucy Malone, attended the event, concluding the night with a farewell speech, and receiving the honor of announcing the newly chosen princess.

As the winner of the title of princess, Beyer will be joining the Daffodil Royal Court. The Daffodil Royal Court is composed of 23 seniors from high schools across Pierce County. Throughout their year as princesses, the girls have weeks packed full of community service, public speaking, and parades. It is a huge commitment, but the organization boasts about the skills and experiences the girls gain from their time on the court.

The Daffodil Festival originated in 1926 after the daffodil industry came to Puyallup. The Daffodil Royal Court is an important component of the festival, as the girls are vital to all of the events put on for the community.

Want to see more from your Daffodil princess? Stay tuned for upcoming events such as the Princess Promenade and Queen’s Coronation, whose dates are to be announced. The Daffodil Parade will be held on Apr 6, where you can see Beyer and the other princesses around the county.