Volleyball dominates at Queen of the Hill

A historic win over Emerald Ridge is leaving spirits high. 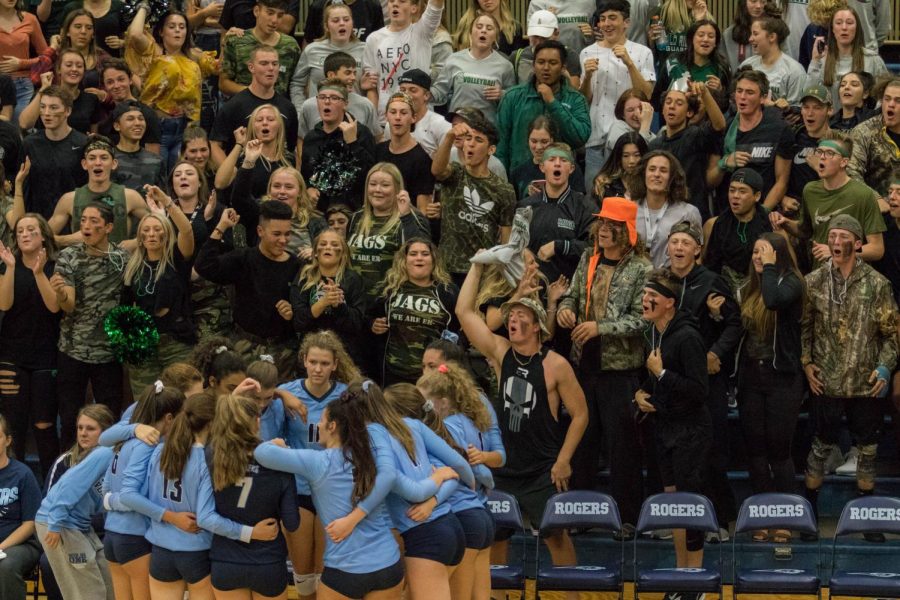 The Emerald Ridge cheering section made plenty of noise behind the Rogers bench at the Queen of the Hill contest on Sept. 26, 2018.

On the night of Wednesday, Sept. 26, the Rogers Rams finally took the volleyball win for Queen of the Hill, after over a decade of fighting for it, on their own territory at RHS.

Starting off discouraged by the sight of the strong ER crowd — decked out in spirit gear and almost outnumbering the Rogers student section — inspiring Rogers coach Kelly Kim was quick to encourage the girls that this was just another game and to go headstrong. The whole rush was nervous and exciting all at once.

However, the nervous jitters came to the cost of the first set of the game, with ER barely winning 23-25. As the second set kicked off, the ER fans got rowdy. By specifically calling out individual players, they claimed they were “in (their) heads.” However, ER was not going to hold the lady Rams back from their full potential. Chelsey Harmon, always proving herself as a team leader, continuously gathered the team in a huddle and hyped the girls up, even if ER was standing right behind the home bench and barking in their ears.

Ironically, Harmon says that “having the Jags nearby was positive … some players fed off their derogatory comments,” increasing the whole team’s desire to win.

The Rogers Rams came back more powerful than ever, crushing the Jags 25-19 in the second set. Moving on to the third set, the girls played amazing defense, and stuff blocked several jag balls. Nothing was slowing down the Rams’ love for the game in a finishing score of 25-16.

In the final set, the Jags were already feeling the sense of loss. After the Rams took an eight-point lead, the Jags started to catch up. Now 24-21, no one could predict if the Jags would take over this win or not.

However, after a sturdy pass from Ally Johnson and a flawless set from Lauren Clark, Maren Dent went for the hit. In a float-like manner and close to the line, ER did nothing but watch it fall, assuming it was out of bounds. They made a terrible mistake … because the ball landed on the court line, crowning Rogers the queens of the hill!

The sense of utter excitement overflowed the court in that very moment. Everyone in the stands and on the bench rushed to the player’s arms. Finally breaking the Jaguars decade streak of defeating the Rams gave a whole new accomplishment to the team. After saying “good game” to their schools’ rivals in the Rams’ traditional sportsmanlike manner, the fans wrapped up the solid victory by singing the fight song loud and clear.

Afterward, Kim exclaimed, “The game was awesome! The team fed off of each other’s positive energy along with all of the energy from the fans. I told the girls that we’ve worked so hard in practices and all of our hard work showed!”

The girls have wanted this win for a very long time — some, like Harmon, since freshman year.

“Emerald Ridge has always been a challenge to play,” she said, “but this year we focused on targeting, strategy, having fun and playing for each other and realized that’s all it really took.”

And finally, Sarah Crowell, the one who wears her number 1 jersey proud, said, “Being a senior and playing for Rogers since my freshman year, it feels so amazing to finally beat the Jags after about 10 years. I have never felt so much support and love from our fans and I knew we all wanted it more than ever!  It’s finally our year to prove the SPSL wrong! Go Rams!”

Now, being one of the tops on the list in their division at 9-2 overall and 5-1 in the SPSL, the season has more excitement to come!

Rogers High School has had great pride in watching these girls grow as friends, in skill, and as a whole on the court. Every game, win or lose, this talented group is always finding ways to improve and encourage each other. Want to define grit? They’ve got it all, and bright futures ahead of them.