Taking a break from social media benefited my personal and academic life. 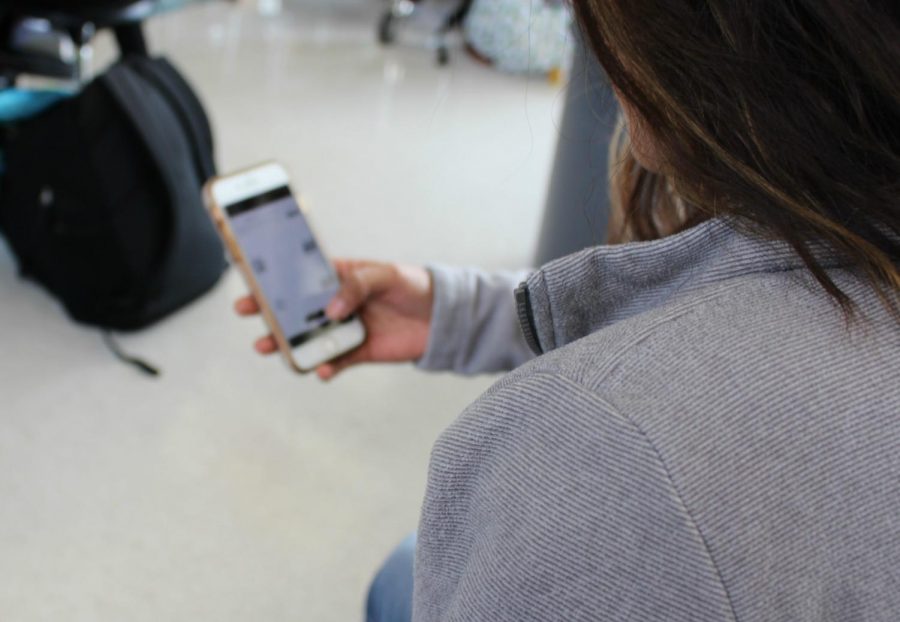 Students often spend time on their phones, even when surrounded by friends.

How often do you whip out your smartphone, put in your fingerprint or let your camera view your face, flip to a certain little square on a screen and click on it?

The answer to that question for me was a lot more than I originally thought.

The presence of social media is everywhere. Everybody uses social media, and it’s to the point where you are the minority if you don’t have a personal profile showcasing your life.

Acknowledging this, last year, I decided to try removing all of my social media for one month just to see what it was like. At the time I was an avid user of Twitter, Instagram, Snapchat, and Facebook.

And I know that not having an app sounds like the epitome of a spoiled, first-world problem, but I just wanted to see how life changed without it and hopefully gain some new perspective.

The first few days were difficult, to my embarrassment. I constantly opened my phone just to press a blank space on my iPhone.

There were times in those first few days where I got a few, “How come you didn’t open my Snapchat?” and “Did you see what I DMed you?”

To which I had to respond “no” and that I was going without social media for a while. People were understanding, even respectful of my decision to my surprise, and I knew that the rest of the experiment was one that was going to be simply and entirely personal.

Sitting at my lunch table in a cafeteria where everyone’s phone is sitting face up in between food and friends, I did still have my iPhone. But when the conversation got stale, where I would usually retreat into the comfort and privacy of aimless scrolling, I couldn’t.

I mean, what was I to do on my phone instead for a prolonged amount of time? Read the news? Scroll through Wikipedia or something just to pass the minutes until fifth period started?

I could, and I did a few times, but what I realized quickly in those first few days and two weeks was that it forced me to talk more to the people around me. If no one was around me was initiating in conversation, then I had to because what else was I going to do?

And by the second week, I fell in love with this notion. I was way more comfortable sitting down at a table with my peers, ready to communicate with each other face to face. And the more that you talked face to face with people the more they reciprocated, and I slowly started to notice that as we talked more and more and were less distracted by buzzes and notifications, that they weren’t using their phones as much either. It was great. Lunch, once again, became social.

The biggest problem I had, however, for the first few weeks was the lack of Snapchat. Snapchat is, by definition, social media, but it’s more of a method of communication. We love it because every picture or text we send is automatically erased. The notification aspect comes in just like a text message and is very user-friendly, making the platform, for many, their primary source of communicating with each other.

I still texted before the experiment and I used Snapchat frequently as well, but there were many times where I knew I was missing things when I didn’t have it. There were times, when talking with friends, that I was oblivious to what they were talking about because something was “sent in the group chat” on Snap.

A couple of kids in my math class had a group chat on the platform in case one of us had a question on homework or something. That wasn’t a part of my life during the experiment, but I adapted and learned to be more proactive by getting additional help from my teacher before class ended.

The worst part for me, though, may have been when a group of my friends went out to do something fun on the weekend and I didn’t get to go because I missed the invitation on Snapchat.

That sucked. But I learned that if people really wanted to get my attention or invite me to something, they would text or call me. And I liked that better because it shows that the other person truly wants your presence or your attention.

I did miss Twitter a little because of how rapidly real-time information could be spread. For example, scores of sports games or big news stories were in my palm almost instantly.

But without that, I learned to be a bit more patient and understanding that I wasn’t going to be able to get all the information I wanted immediately. We live in a modern, get-everything-the-second-it’s-released kind of world, and it’s hard to believe that what taught me my biggest lesson of the power of patience was something as stupid as a lack of Twitter.

The biggest benefit I noticed without having social media was how much more focused I was in nearly every aspect of my life.

I do consider myself self-motivated, making conscious efforts every day to do homework, exercise and spend time on my own hobbies.

But without social media, I was doing everything that I did before far more diligently. Going through an entire night’s homework without getting the buzz of Snapchat or pouncing at the opportunity to check the score of the football game was so relieving. And without my cell phone-based distractions, I was able to finish my homework significantly faster- to the point where I could catch the tail end of Monday Night Football.

Exercising was also more productive. Lifting weights was a breeze when you didn’t have the urge to send a mirror selfie. Writing that sentence seems like such a privileged thing to write, but it is a commonality that I think many of the people in my generation can relate to.

I could be on the couch and sit through an entire movie, one that I had watched before, with an entirely different view. Without social media, I was shocked at how watching The Dark Knight and The Shawshank Redemption became like a first-time experience, even though I had watched both those films more than once.

By the end of the month and my experiment, I had a few takeaways.

Social media, though it may seem otherwise, is unnecessary. Even for high schoolers.
If people really want to do something with you or need to get into contact with you, they will call, text, or see you in person.
Apps and profile pictures and short bios, where you’re forced to describe your life in three lines, don’t define who you are. (Really, do social media companies expect us to explain our lives to the world in three simple, stupid lines? Our lives are a lot more important than that!)

After a month I had fallen in love with my new sense of dedication and decided to keep it off for a few more days.

Then a couple more.

And a couple more.

Before I knew it it had been two months.

If you had asked me before I started if I thought I was going to be able to go two months without social media, I may have laughed in your face.

I did eventually re-download the apps out of pure boredom and curiosity. Not necessarily of what was going to be portrayed on my tiny glowing screen, rather how I would feel after seeing it.

The information, the pictures, the updates, the Tweets, it all seemed stressful and pointless. When you’ve gone two months without the buzzing and the scrolling you’d expect to be overwhelmed at the influx of information for your mind to absorb. But it all looked stressful, like an assignment I had to scroll through to be caught up in social atmospheres.

I deleted them again.

In the age of social media and the technological revolution that our generation grew up in, it would be unrealistic to assume that my life, or anyone else’s, is going to be without social media. But if there’s one thing I learned by removing it from my life, it’s that social media needs to be consumed in moderation. It can’t be a complete lifestyle, a daily to-do or something that your life relies on for consistency.

I choose to keep social media but use it sparingly. Usually, only a couple days a week, or only check it in depth a few times a day.

I would challenge millennials or anyone who feels like their life is somewhat consumed by social media to delete the apps for a while and see what life is like yourself.

Our lives are short, and I’d prefer to live it than watch it through a tiny piece of glass.