I used to pledge allegiance…

Is your second period class starting to stop saying the pledge? Read to find out what your peers have to say about this! 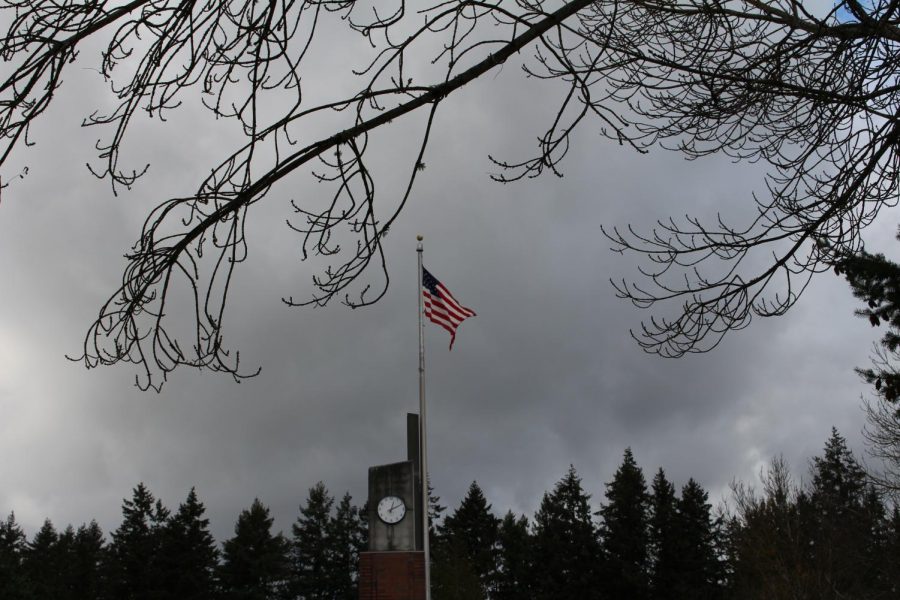 There's a constant debate over whether it is okay to sit or stand during the pledge.

The chorus of student voices reciting our nation’s pledge in their second period classes has been diminishing as of late. The multitude of voices accompanied by a hand to the heart is a sight that has become harder and harder to be seen in our classrooms. What are the origins of this decreasing respect to our flag? A lack of patriotism? Passivity? Content controversy? Laziness?

Some students expressed that not saying the pledge was a deliberate choice made as a statement against the sitting government. Tommy Olmstead, a former senior who sits during the pledge, said, “I don’t agree with the state at which our government is in and the people who run our country.” He said that he would “start doing it again when we get a new president.”

But this was a statement he made for himself and Olmstead doesn’t have a problem with the other students who do choose to say the pledge: “People can do it if they want. It’s good for being a nation and uniting as a country.”

It turns out, Olmstead is right — the pledge is for uniting as a country. Or at least that was one of the original purposes behind its creation. The origins of the pledge date back to 1892 when a social minister named Francis Bellamy created it as part of an American expansionist program in celebration of the 400th anniversary of Columbus’s “discovery” of the New World. The originally 23-word pledge had underlying intentions that sought to define “Americanism” in the face of increasing immigration in the early 20th century; it was an effort to solidify national identity and assimilate newcomers of the country into our country’s “culture of freedom.”

The pledge wasn’t required to be recited in schools everyday, however, until the 1930s, and the controversial phrase “under God” wasn’t added until 1954 by President Eisenhower to supposedly help emphasize the distinctions between the free United States and communist Soviet Union during the Cold War. With these historical intentions in mind, it would be remiss not to note the First Amendment right of students to refrain from standing and reciting the pledge — a right solidified by the 1943 Supreme Court case West Virginia State Board of Education v. Barnette.

Dutifully exercising this right is current senior Araya Boday, who says that she “[doesn’t] see the point in pledging more than once. I stood for it once, I don’t gotta stand every day. I respect the flag — that’s why I made a pledge once. It’s like a promise: Once you make it, you don’t gotta make it every day.” In her case, the daily act of renewing your oath of loyalty to your country doesn’t add further value to that oath.

Former student, Kevin Weng, says that it is simply the environment of his specific second period class that accounts for his decision not to say the pledge, not an intentional political statement. The hustle and bustle of other students continuing to do their work makes saying the pledge awkward and turns it into more of a 30-second interruption of work time. Weng said that he would most likely do it if he were in a different classroom environment.

In contrast with these students, however, some members of our Junior Reserve Officers’ Training Corps (JROTC) expressed strong sentiments about the importance of reciting the pledge.

Matthew Suce, Second Lieutenant, says that “you should definitely say the pledge because it’s a form of respect to the nation and it gives you a sense of national identity and who you are.” He goes on to say that “It’s one form of being a good U.S. citizen.”

When asked what he thought about those that chose not to stand for the pledge, he replied, “it is their choice as a U.S. citizen and they have the right not to say the Pledge of Allegiance. Do I disagree with that? Yeah. But do I have a say in what they do? No.”

“It personally offends me [when people don’t say the pledge] because a lot of my family served in the military,” he said.

However, acknowledging the fact that he has no control over the actions of others, Madsen reluctantly added, “if you’re not standing, you should have a really good reason for it — like because you’re making a statement about social inequality or something.”